Don’t worry, we’re not talking about anything controversial!

In fact, our Which Side are You On? PowerPoint show will appeal to everyone who wants to eat healthier for any reason.

One side is the typical American diet of fast food and sugary beverages. The other side is a healthier eating pattern filled with nutrient-dense, less-processed foods like fruits, vegetables, whole grains, lean protein, and low-fat dairy.

Which Side are You On? uses more than 50 professional photographs of real food to compare the two sides.

This is a great way to do nutrition education for visual learners, people with low literacy, or any audience you want to impress. They will appreciate the picture comparisons and the messages will be easy to remember.

Use Which Side are You On? to teach:

Bonus – it’s only about 20 minutes long, leaving you plenty of time for Q&A or a cooking demo!

There’s also a Which Side are You On? poster. The poster and the PowerPoint come with our Fast and Lean Meal Planner Handout, which will help your audience start choosing the healthy side for all their meals right away.

Which Side Are You On PowerPoint Show PPT With Handouts - DOWNLOAD $49.00 Add to Cart

Menu planning is key to a healthy dietary pattern, but many folks don’t give it much thought, think it’s too hard, or don’t know where to start.

The tools in our Heart Healthy Menu Planning theme can help you teach the basics of meal planning to just about anyone – students, parents, employees, or clients.

It starts with the Heart Healthy Menu Planning Dry-Erase Poster. Planning meals is a breeze when you have the steps right in front of you. Pick a heart healthy protein, vegetable, whole grain, fruit, and dairy product – voila!

Here’s a fun activity to do with groups or individuals:

After a challenging spring, everyone is ready for summer break. While we continue to live with the pandemic, summer can still mean the start of something new and fresh and healthy. What better way to add joy than to add cooking skills, adventures, and projects in the kitchen!

Whether you work with children or adults, here are some ways they can splash into a summer of healthy eating:

Fresh Herbs: Plant a few of your favorite herbs to use in summer salads and salsas. Or buy fresh herbs at the farmer’s market. For more on herbs:

Knife Skills: Practice your knife skills by cutting up summer fruits and veggies. Make it fancy or keep it simple. Even kids can be taught to use a knife safely. Chopping tips:

Plan It: Meal planning keeps healthy eating on track all summer long. Plan for a week or plan for a day … whatever works for you! Tools to use:

Cook Together: Make meal prep a group effort by giving everyone a job … even if it’s a little messy.

Buy Something New: Buy yourself something a new kitchen gadget to use with summertime fruits and veggies. Maybe a salad spinner, a special container for fresh produce, or a new vegetable brush.

Summer with MyPlate: Check out MyPlate Summer Resources, including this cute idea for a “mad-libs” type of activity.

According to the U.S. Department of Agriculture, the average American family of four loses $1,500 to uneaten food each year. Food waste can impact your budget, but also the environment. One way to reduce food waste is to plan your meals. Of course, meal planning has many more benefits – it can help with eating on a budget, weight management, eating more family meals, following MyPlate, and more.

Here are some ways to teach your students, clients, or other groups about meal planning and reducing food waste:

Remember, planning meals can help you buy the right amount of food and use it before it goes bad. That’s good for you, your family, and the world!

There’s something about September that makes people feel refreshed and ready to start something new. This makes it the perfect time to talk about menu planning. Use our Menu Planning handout to show your clients the benefits of planning ahead.

Here are the benefits of planning meals ahead of time:

Remember MyPlate’s lesson to make half of your plate veggies or fruits and veggies.

If planning a week’s worth of meals is overwhelming, we have some suggestions to make it easier:

Help your clients say goodbye to summer and hello to healthy meal planning!

“When you fail to plan, you plan to fail.” Truer words were never spoken, especially when it comes to healthy eating! In fact, research shows that planning meals is associated with healthier diets and reduced rates of obesity (1).

There’s no doubt about it — planning sets clients up for success. Our new Menu Planning Handouts make it easy! Healthy menu items are pictured and listed at the top. Choose from these to fill out the one-week menu planning chart at the bottom.

The Menu Planning Handouts are great for a class or one-on-one counseling. They’re printed on both sides, so clients can do one side as a group or with your help, then use the other side to plan on their own at home.

I like the idea of using the Menu Planning Handout as a menu planner AND a food diary all in one. Clients can use it to plan meals and snacks for the day or the week, then check off what they eat as they go.

Adding the matching dry-erase Menu Planning Poster or Wall Decal makes this the perfect system to help your clients plan to succeed in their healthy eating goals.

The other day, I roasted a 15-pound turkey, but I was only serving two people. What was I thinking?

Before Thanksgiving last year, our grocery store offered whole turkeys at $0.37 per pound if you bought $35 worth of groceries. I had to take them up on that deal, which meant that I had two turkeys in the freezer. Recently, I decided to cook one of them for guests, but they cancelled. Since I already had the turkey thawing in the fridge, I cooked it anyway. That’s the easy part: no dressing, no basting, cook until the thickest parts reach 165 degrees F. Results: a lot of food for two people. 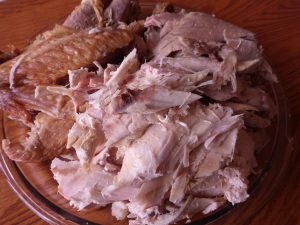 Frozen turkeys will keep for a long time if held below zero degrees. They’re usually packed in air- and water-resistant plastic wraps that help prevent loss of quality during freezer storage. The general recommendation for freezer storage is one year, if the food has been frozen that whole time. This is a quality recommendation and not a food safety deadline.

According to the National Turkey Federation, removed bones typically reduce the weight of the turkey by 25% and my turkey was fairly true to that estimate. I weighed the bones after I cooked them down for soup and picked the meat off, and I had 3.3 pounds of “waste” (there was additional fat and moisture I couldn’t weigh) from my 15-pound turkey. We ended up with about 10 pounds of meat at around $0.50 a pound. What a deal!

The usual recommendation is to purchase one pound of turkey (on the bone) for each person served. This is geared for holiday meals with all the trimmings and to save leftovers too. With my February turkey, we had a few meals of roast turkey and then two big pots of soup. We also had lots of leftovers for sandwiches at a much better price, taste, and quality than that expensive processed turkey meat in the deli. Plus, I froze a few packages of cooked turkey for quick meals later. The recommendation for frozen cooked turkey is to eat it within three months. 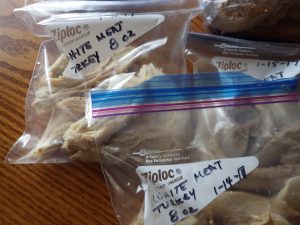 The US Dietary Guidelines suggest choosing lean or low-fat meat and poultry as your protein source. Turkey is lower in fat and calories than many other foods in the protein group and can be a good choice. According to the USDA Nutrient Database, 3 ounces of whole turkey (meat only) contains 135 calories, 24 grams of protein, and only 3.26 grams of fat.

Even if you can’t get as good a price as I did, roasting your own turkey or turkey parts any time of the year can be an easy job with lots of nutritional benefits.  Why wait until Thanksgiving?

Portion control is often key to maintaining a healthy weight and reducing the risk of chronic disease.

We’ve all heard about the many benefits of a healthful eating pattern that incorporates proper portion control.

Making portion control something that is accessible and appealing to your clients, on the other hand, can be more of a challenge.

That’s why my team and I created these beautiful portion control plates! 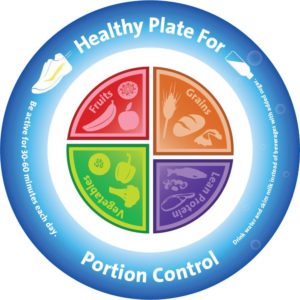 We designed these plates to help consumers stay on track when it comes to maintaining a healthful diet, practicing portion control, getting regular exercise, and staying hydrated.

By using this plate to dish up their meals, people can save up to 60% of their daily calories per meal (compared to just loading a plate by eye like most people do). This plate keeps foods in the proper proportions and portion sizes, as recommended by MyPlate.

The inside of the plate guides people to balancing their plates with:

Meanwhile, the rim of the plate is full of reminders to sip the right kind of beverage and get moving from time to time!

The beautiful color pattern of the plates makes them attractive for home, picnics, the office, and parties. Plus, they work beautifully in wellness fairs, cooking demos, classrooms, and one-on-one consultations. 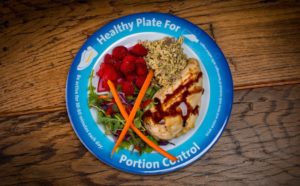 To celebrate the release of these wonderful nutrition education materials, I want to share two activities that you can do with these plates today!

I hope you liked this resource spotlight!

Here are some other great portion control materials — which will make your life easier? 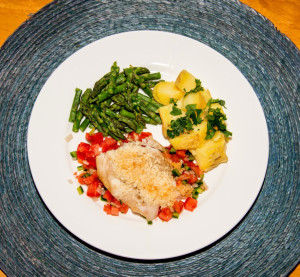 Okay, I’ve got a story for you today. My husband and I were recently eating lunch — I had made us each a quick salad with lettuce, apples, some thawed frozen berries, avocado, leftover grilled chicken and homemade balsamic vinaigrette. As we ate, my husband commented, “It’s amazing that you look in the refrigerator and see salad; when I look in the refrigerator I just see soda.”

That seems to capture a common sentiment in a nutshell. How do people plan menus and think about turning what’s available into a healthful meal? Is this something that’s intuitive or can it be learned?

For me it’s easy, because I love to cook and experiment with food. But what about people who really don’t like to prepare meals or don’t have these skills?

All home management experts say that planning meals ahead of time is the number one way to save time, have balanced meals, control the food budget, avoid food waste, and reduce trips to the grocery store. However, I’m realistic enough to know that most families don’t do this.

So, how can we, as health educators, make this easier for our clients?

Here are a few of my latest ideas…

Try these tips and who knows? Maybe the next time your family looks into the fridge, they’ll see dinner! 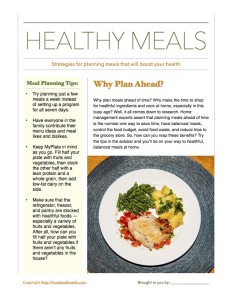 Here are some more healthy meal resources, brought to you by the Nutrition Education Store! 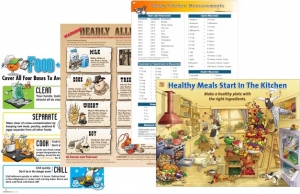 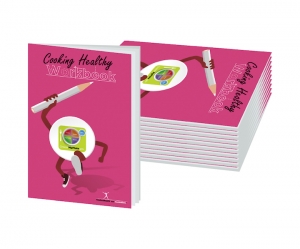 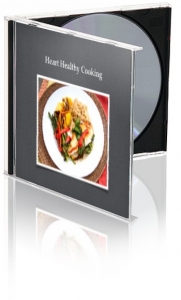 Planning a family meal together can be a great experience for kids and parents alike. You can turn an everyday dinner into a dinner party with just a few simple steps…

Make lists of everything you need.

Go shopping for the ingredients and equipment that you need.

On the Day of Your Party…

If you want to have a remarkable meal together, a few simple changes can really make a differenec.

• Set the table with…