Americans are eating more ultra-processed foods than ever. That’s not a good thing, considering the link between highly processed foods and chronic disease, obesity, and cancer.

We have a new poster that addresses this issue head on: Nutrient-Dense vs. Ultra-Processed Food poster. This beautiful poster uses photographs of real food to encourage people to eat more whole foods and minimally processed foods that are nutrient-dense instead of ultra-processed foods.

You can include the idea of nutrient-dense versus ultra-processed foods when you teach about most nutrition education topics. For example:

It’s time to give fiber a high-five. How do you do that? Take a look at our new High Five to High Fiber poster and you’ll see.

Kids and adults alike will love this colorful poster that features vibrant photos of real high fiber foods, all within the outline of a hand giving a high-five.

Why a high-five to fiber-rich foods? Consider these five points from the 2020-2025 Dietary Guidelines for Americans:

This isn’t good news for Americans, but the High Five to High Fiber poster doesn’t dwell on the negative. It stays positive, with the simple message that all the beautiful fruits, grains, nuts, vegetables, and legumes pictured contain dietary fiber.

As a bonus, the poster is also great for teaching about a plant-based diet.

So let’s all give a high-five to high fiber foods!

Here’s a 3-step approach to eating more whole grains that you can share with your classes, patients, or clients:

Other ways to get into the spirit of Whole Grains Month:

Want to save big in the Nutrition Education Store? We’re offering free shipping right now on all US orders, no code necessary!

Between low carb diets and the gluten-free craze, grains get a bad rap. Set things straight by teaching the truth about whole grains.

Whether you want to do a deep-dive webinar series, short Facebook or YouTube Live sessions, or a bulletin board display, we have the materials you need in our Whole Grain theme, including:

What to teach? Here are some catchy ideas to get you started:

Americans love to hate carbohydrates. If cutting carbs means avoiding foods like white bread, big bagels, and sugary cereals, go for it. If it means you’re afraid to eat a banana or drink low-fat milk, we need to talk!

It’s our job to teach people two things about carbs. First, that carbs are the body’s main source of energy, so you can’t do without them. And second, that all carbs are not equal when it comes to calories, fiber, and important nutrients. Our Be Carb Smart PowerPoint, poster, and color handout can help you set the record straight.

Here are some teaching tips to help people Be Carb Smart:

Carbs get a bad rap. We can restore their reputation by helping folks learn to be carb smart!

Are you looking for an easy (and educational) way to brighten up a classroom, hallway, office, or cafeteria? Check out our What’s On Your Fork poster, bulletin board banner, and wall decals. They feature beautiful, professional photographs of real, healthy food on a black background – these really stand out!

There are so many fun things you can do with the What’s on Your Fork theme. Here are just a few ideas:

The most recent Dietary Guidelines for Americans recommend that all adults eat at least half their grains as whole grains – that’s at least 3 to 5 servings of whole grains every day. The average American eats less than one daily serving of whole grains, and some studies show that over 40% of us never eat any whole grains. So, I’ve been on a mission to try different whole grains to add variety to our meals.

One whole grain that tends to be forgotten by many is BARLEY.

As a kid, I remember loving those little white fluffy things floating in my canned vegetarian vegetable soup.  That’s the barley.  If you are like me, this is the extent of your experience with barley, you may be surprised to know that it is the world’s fourth most important cereal crop after wheat, rice, and corn.

Barley can be prepared in many ways in addition to soups and stews. It used as a hot side dish or served as a cold salad. Or eaten like oatmeal. Barley flour is used in bread, pancakes, muffins, and cookies. If you’ve never eaten barley plain, the flavor can be best described as “rich” with a mild sweetness.

Nutritionally ¾ cup cooked barley contains 160 calories, 8 grams fiber and 6 grams protein. It is an excellent source of manganese, selenium, and thiamin and a good source of magnesium, phosphorus, copper, and niacin. There has been enough research documenting barley’s role in protecting heart health that the U.S. FDA allows barley foods to claim that it reduces the risk of coronary heart disease.

I went looking for barley at my local store.  It’s in the section with the dry beans and rice. I had to look high up on the shelf and found “pearled barley.”  Barley has a particularly tough inedible hull that adheres to the grain kernel. This hull is difficult to remove without losing some of the bran. The easiest way to get this off is to scrape or “pearl” it. That’s why it’s called “pearled barley.”  This process does remove some of the bran. Thusly, “pearled” barley is not technically a whole grain.

I contacted Kelly Toups, Director of Nutrition at the Whole Grains Council about only being able to find “pearled” barley on the grocer’s shelves. She responded that this is not a big problem because barley is different than other grains because the fiber is distributed throughout the grain kernel, rather than being concentrated in the bran.  This means that even pearled barley has a rather impressive amount of fiber.  Barley has 17% fiber which is the highest of all the whole grains. Comparing it to other whole grain foods: brown rice contains 3.5% ?ber, corn about 7%, oats 10% and wheat about 12%.

Toups told me that “whole grain barley does offer higher levels of many essential nutrients when compared with pearled barley.  One 45-gram serving of hulled (whole grain) barley has approximately an additional gram of fiber and protein, and has about twice as much magnesium as pearled barley.”

If you want to get the entire whole grain goodness of barley look for hulled barley or hulless barley. If you can’t find it at your store’s whole-grain aisle, barley can be purchased online.

Tips for cooking barley:  combine one cup of dry uncooked barley with three cups of liquid. This will expand to about 3 ½ cups of cooked grain. Whole grain barley can take 45-60 minutes to cook when simmered slowly. It can be helpful to use a rice cooker since you can cook almost unattended.

I love teaching about whole grains! One reason is the look on people’s faces when they understand the difference between a whole grain and a refined grain. I always use a diagram of a kernel of wheat (like this!). When they see the bran, the germ, and all the nutrients that are removed during processing, it’s like an “ah-ha” moment. I see this when I’m talking to third-graders, grandparents, and everyone in between.

Another reason I love this topic is because switching to whole grains is a small change that anyone can make. Swap whole wheat bread for white bread? Can do! Order brown rice instead of white rice? You bet! Small changes are do-able and can add up to a healthier diet in the long run.

We have everything you need to share the whole grain message in your classes, individual counseling, cafeteria, waiting room, or health fair. The Go for the Whole Grain poster and banner feature:

Our posters and banners come with copy-ready handouts. Here are 7 examples of lessons they address that make great activities you can use in your classes:

Use our Whole Grain materials in counseling or classes on:

And don’t forget about our Go For the Whole Grain stickers and bookmarks! How about visiting the school cafeteria one day and giving a sticker to every student who has a whole grain on their tray or in their lunch box?

Instead of New Year’s resolutions, choose a word for 2020. This word or phrase becomes your theme for the year. It guides you through making decisions, facing challenges, and just living your day to day life. (For a good overview of the word of the year concept, check out OneWord365.com.)

Why not have your clients or students come up with their own health and wellness word for the year? Help them decide what they want to focus on, then come up with a word or phrase that will remind them of this intention. Here are some ideas:

Your word for the year won’t work if you don’t think about it every day. So have your clients put it everywhere! 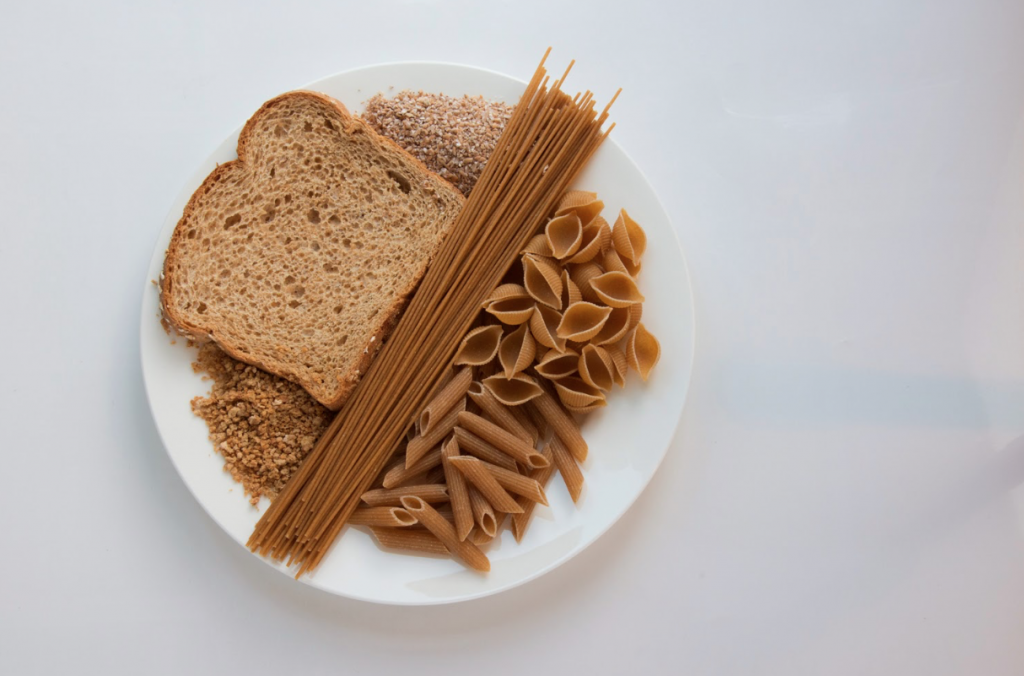 Whole grains are often great for health, yet most Americans consume too many refined grains and miss out on the benefits of whole grains… while adding excess empty calories to their eating patterns.

To help your audience learn about whole grains, their health benefits, and how to incorporate them into a healthful eating pattern, I’ve put together a few engaging activities just for you!

(And, if you’re really patient, you’ll find a PDF handout hidden in the post as well).

Gather a few packages of foods that have varying whole grain content. Divide participants into groups and give each group a collection of those packages. Have the groups line up their foods in terms of most to least whole grains per serving.

Once everyone has finished making their selections, review their work as a class.

Highlight the importance of using the Nutrition Facts label to evaluate whole grain content and draw everyone’s attention to which words to look for in ingredient lists. Make a note of front-of-package claims as well. Was anyone fooled by statements that hint being wholesome but are not whole grain, like, “100% Stone Ground,” “Multigrain,” “Honey Wheat,” etc? Explain the importance of 100% whole grains. Note that stone ground can be whole grain but you should check the ingredient list to be sure.

If time permits, have the groups combine to line up all the product packages from most to least whole grains. How did everyone apply the knowledge from your discussion?

This is a brainstorming activity, so all you’ll need is a space to write down people’s ideas (a whiteboard or giant notepad works especially well) along with a writing utensil. Much of the information that could help your clients internalize this lesson can also be found in the Go for the Whole Grain poster, though it is not required.

Finally, to get to the crux of the matter, list common refined grain foods on your writing surface. What substitutions can people make in order to consume fewer refined grains and more whole grains? Discuss the ideas as a class, writing out compelling switches as you encounter them. 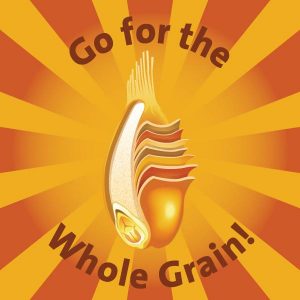 Distribute copies of the handout How Well Do You Know Whole Grains? Have participants take the quiz individually (this makes a great icebreaker or take-home assignment too), and then bring everyone together to go over the answers, addressing any questions they might have about the information provided. If you’d like, you can distribute prizes like these whole grain stickers to people who got the most correct answers. 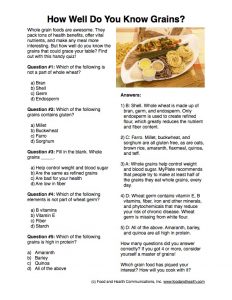