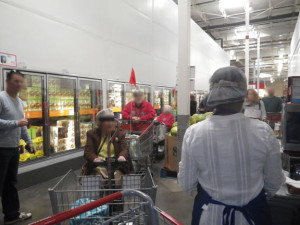 The author Janet Evanovich calls it the “Senior Buffet”.  Other folks call them the “sample ladies.”  I bet you know what I’m talking about. The folks who offer food samples at the big box stores.  Just wander the aisles of the store while shopping and graze along the way.I have noted that most of the time, the foods being sampled are the higher in calories, more processed and easy to prepare items.

It’s easy to eat eight to ten samples during one lap of the store. These sample ladies (and men) are very popular.  Samples are gobbled up by almost everyone.  Have you ever calculated how much food you’re eating on one of these shopping trips?  Or more specifically, have you looked at the sodium counts of the foods?

Since my husband has been on a healthier diet due to his heart disease he has really been watching the nutrition labels more closely.  One of the things he’s specifically checking out is the sodium content of the food.    I was proud of him last week when I heard him say “no, thank you” to several of the sample ladies.  The discussion in the car on the way home was interesting.  He asked me “did you know how much sodium was that French onion soup they were sampling”.  SMILE

Yes, I did notice.  One cup of soup had about 800 milligrams of sodium.  They were offering generous samples, I’m guessing they were  ¼ cup each.  If you’re counting that’s 200 milligrams.  Add to that:

I admit those little bits don’t really seem like much. But if you add them up the total was 683 milligrams of sodium. And that’s just a few of the items they were sampling that day.  If I asked someone what they had to eat throughout the day, they would probably not mention the “senior buffet.”   This is sometimes called distracted eating—people eat because it’s there and then don’t even realize they’ve done it.

If you finished off your visit to the store in the food court with one of their inexpensive hot dogs (1750 mg) and a fountain diet soda (76 mg in 16 ounces) your whole shopping trip could have you consuming a whopping 2509 mg of sodium.

How much sodium should a person have in a day?  The 2010 Dietary Guidelines say that younger, healthy people without high risk for hypertension should reduce sodium to less than 2300 mg. It is recommended that some folks keep the sodium to less than 1500 mg/day.  This is a fairly large group of people (including my husband and my self). You fit into this lower group if:

Just a few samples and a hot dog and you’re well over the 2300 recommendation and way over the 1500 mg recommeded for this special group.

How can you thwart this sodium overload?

What do we do?  Now, I’m not saying we’re perfect on this, it’s hard. These foods are tempting, most of the time they taste great and make food preparation easy.  It’s just another hurdle we’re trying to jump over.  But I think we’re getting there, one shopping trip at a time. 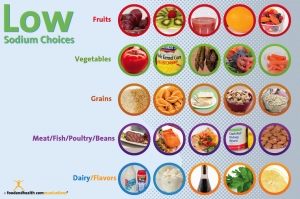 But wait, there’s more! Because we love you, we’ve set up a free sodium infographic for you to download. Get your copy today! 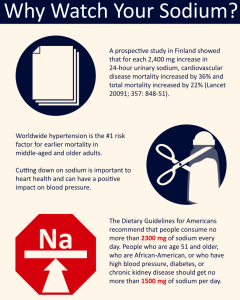