You can make all of the healthful dishes in the world, but if your kids don’t want to eat them, it feels like you are spinning your wheels. As the Chef and Founder of Food & Health Communications, Inc., I am keenly aware of what foods my son and I need to eat for optimal health. I also know that this is easier said than done, even for me as a chef because it is hard to find the time.

My son, Nicholas, was one of the pickiest eaters around as a child. He didn’t want any foods on his plate to touch, he wouldn’t try anything “mixed,” he didn’t like any kind of sauce, he only liked a few vegetables, he wouldn’t try soup, and he wouldn’t even look at a salad. At first, the whole thing was baffling and I didn’t know where to start. I ate a wide variety of healthful foods, and I exposed Nicholas to them at a very young age because I made a lot of his baby food from scratch so how could he be so picky? I felt that I should do something to help him expand his repertoire and enjoy more fruits and vegetables. I did notice that whenever he helped me cook something, he was more likely to eat it, so that is where I started and just expanded to these projects:

1) We started a simple, inexpensive herb garden. Nicholas and I spent quality time together learning about herbs, buying them, growing them, harvesting them, and using them in our cooking. During the evenings and on weekends, we would stop and look at the garden, pick some herbs, or care for them. Before bed, I would read him a funny cooking book called Warthogs in the Kitchen. Herbs are amazing because they have a wonderful smell. Mint was like his gum; rosemary is like a tree; basil smells like pizza sauce; thyme is a little like the woods. I used the herbs as a way to get Nicholas to try new foods, and I was met with instant success. We made herb-flavored vinegars that could be used on salad, which prompted him to start eating salads. I also used the herbs in new and healthful dishes like beans and rice, taco salad, tortilla pizzas, stews, etc. When herbs from our garden were in play, Nicholas would usually try the new food that featured them. He didn’t like every dish, but I?never gave up on getting him to try healthful foods.

2) We started doing more physical activities together. I noticed that whenever Nicholas’s activity level increased, so did his appetite! Instead of watching TV after dinner, we went for a bike ride or a walk with the dogs. Whenever I ran, he would ride beside me on his bike. When I swam, he joined me for the last few laps. He even did a triathlon and won first place!

3) Healthful food was always available. I kept 3 or 4 different types of fruit ready to eat in the refrigerator at all times. Salad was always cut and ready, along with potatoes, frozen vegetables, and baby carrots. And fruit was served in the most creative desserts. 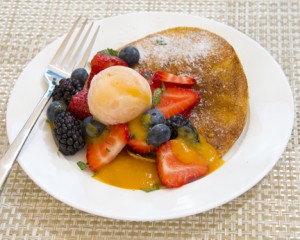 4) No bribes, just snack platters slipped in. I never bribed him to eat healthful food. Food is not a reward. It is nourishment. But I did slip a fruit plate in his room while he was playing video games  (screen time was never in excess, though, because we always had a lot of fun outside toys plus dogs to walk). A bowl of baby carrots usually appeared on his desk during homework. The best time for fruits and veggies is when they are busy and you just “make them appear.”

5) Food and meals were always pleasant. I didn’t force him to eat anything he didn’t like nor did I punish him for not eating a particular food. I offered a wide variety of healthful foods and he chose what he wanted to eat. I did not keep a whole pantry full of chips, crackers, cookies, and sweetened cereals, either. When we wanted to eat cookies, we make them from scratch. I did buy cookies or crackers as an occasional treat. That way, we established that those foods weren’t forbidden — they just weren’t mainstays. I always make a big deal about dinner – it takes little effort to set a beautiful table with placemats, cloth napkins, nice water goblets and bone china or any neat china. We have a candle that is battery operated and it comes on every night!

6) Let’s cook! He helped me with meal preparation on most days. This is not always easy when you are tired or in a hurry, but it does make a difference. Here is our special chocolate chip cookie recipe along with age-appropriate kids tasks.

7) Backups count, too. The after school babysitter had a menu and recipes so that she could prepare healthful snacks and meals. Our babysitter really loved the cooking lessons and she just wrote that she is getting married and she is so happy she can make so many good things!!

8) Shopping is a fun activity. We grocery shopped together and visited farmers’ markets, too. The focus was what to put on our list and we always stuck to it in the store.

9) Dine fancy. I took him to fancy restaurants and let him choose whatever he wanted. This is a situation that really promotes the opportunity to try new things because it is their choice. He picked the most adventurous things like stuffed zucchini blossoms when we were dining in Greens, the famous vegetarian restaurant in San Francisco! It makes the child feel special when  you take them to a nice place to eat. When he was young we dressed up and I would talk about how he was expected to act. It wasn’t always perfect in the beginning but now he is a perfect gentleman.

10) Grow more. He planted a vegetable garden when he got older. The items to plant were his choice and he was so proud of his tomatoes, potatoes and huge zucchini.

11) Teach them to cook. He learned a whole repertoire of items he can prepare that included: cookies, salad, pizza, macaroni, bean quesadillas, salsa, pasta and much more. I bought kitchen equipment like quesadilla makers, bread machines and waffle makers that help him succeed. His favorite dish right now is a vegetarian pannini.

12) Chef’s table. He created a chef’s table in his room for my birthday and he planned the menu and cooked!

13) Summer camps can enrich knowledge. His last summer camp was at Stanford for 2 weeks where he and his classmates at Stanford’s OHS worked on a multi-disciplinary topic, “The Problem of Food.” They were required to read “An Omnivore’s Dilemma”, plan menus, visit farms, calculate kitchen math and cook for an audience. Other summer camps have taught him to program iPhone Apps and he is the programmer for Salad Secrets and Holiday Secrets, two of the food apps we made together. The important thing is to find one that a child will love.

14) His list, too. Now he helps me with the meal planning and grocery list. We have a list that stays on the refrigerator and whenever he requests an ingredient, he puts it on the list and I buy it! Usually his requests include black beans, tortillas, salsa and bottled waters, because he is still riding his bike to the pool and swimming!

15) Have fun and don’t worry. When he was a toddler he would eat watermelon for 3 days in a row. I likened that to reading the same book over and over. And once, when I was practicing for the ProChef II test, he discovered chocolate eclairs and wanted them for breakfast, lunch and dinner. He even put them in his lunch box. That was the only time I made them and it a good memory.

As you can see, the possibilities for kids and food are endless. It usually only takes 10 more minutes each day to make something special for dinner together and the memories are priceless. 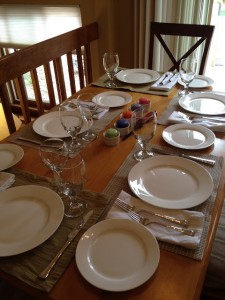 Judy is a graduate from the Culinary Institute of America and the Fachschule Richmont in Luzern, Switzerland. She spent over 20 years in foodservice. She was the executive pastry chef for the Grand Hyatt Westshore in Tampa, FL and The Hyatt on Gainey Ranch in Scottsdale, AZ. She has received the ACF Chef of the Year, ACF Bronze Medal and ACF Gold Medal. She holds the ProChef II Credential from the Culinary Institute of America. She has authored 12 books including Salad Secrets, Holiday Secrets, No Battles Better Eating, Cooking Demo Ideas and a new one coming up called the Art of the Lowcal Dessert. Her work has appeared in Chocolatier Magazine, Bon Appetit and Great Chefs of the West.