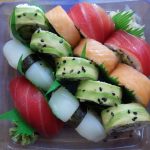 Over the past several decades, sushi has become very popular in the United States.  It is now common to hear folks going out for sushi,  bringing it home from the grocery store or even making it at home. Sushi business is worth over $2.2 billion in the US and grocery store sushi sales are booming according to Fortune magazine. Overall sushi sales have grown by 30% in the past decade. But, is this sushi safe to eat?

First off…let’s set the record straight…sushi isn’t just raw fish. Sushi literally means “seasoned rice” and this rice is the key ingredient.  However, the term sushi is generically used to describe bite-sized pieces of raw fish, shellfish, cooked fish or vegetables and other ingredients on a bed of seasoned rice or simply the consumption of raw fish in the Japanese style.

Sushi is one of those foods that can be risky —especially for people such as children, elderly, the immune suppressed and pregnant women who are already more susceptible to a foodborne illness. 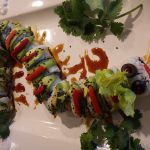 If sushi has been prepared according to regulations of the US Food and Drug Administration (FDA) and local and state health regulations it should be safe.  These are some concerns and things to keep in mind when ordering, making or eating sushi:

UNCOOKED SEAFOOD. Raw animal products may contain bacteria.  Cooking seafood to 145 degrees can really reduce the risk of food borne illness. Safer sushi is made with cooked products such as cooked fish, crab, or tempura shrimp. Or it skips raw protein and just utilizes raw veggies.

CROSS CONTAMINATION.  Just like any other food,  the fish or other ingredients in sushi could be contaminated at any time along the food chain—from the fishermen to the processor to the sushi chef to the consumer. Without the cooking step, there is just more risk and more chance of contamination. The raw seafood  and other ingredients should be kept at 41 degrees or below and cooked items over 135 degrees.

SUSHI RICE. Cooked rice should be kept at refrigerator temperatures unless it has the appropriate amount of acid (usually rice vinegar) added. An experienced sushi chef knows how to make rice correctly so it reaches a safe pH.  If you’re doing this at home, don’t guess about the pH and let the rice stay at room temperature for more than two hours. 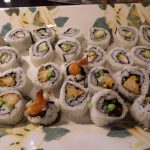 PARASITES. While many people think “fresh is best”,   this may not be the key with sushi fish.  Fish to be eaten raw or partially cooked  should have been  frozen to destroy any parasites that may be naturally in the fish.   This is not something that can be done in a home freezer—the temperatures need to be very cold for a specific amount of time.  Good sushi restaurants purchase their fish from suppliers that properly freeze their fish. Not all fish are prone to parasites. Among the fish that do NOT need to be frozen to destroy parasites are:  molluscan shellfish, many species of tuna including yellowfin (ahi), bluefin, bigeye, albacore, or blackfin and some farm-raised salmon.  Ask questions if purchasing fish to be eat raw at home, insure it has been properly frozen.  Proper cooking will also destroy these parasites. Remember that the freezing does not destroy all bacteria or viruses that may be on the fish. Careful handling after freezing and thawing is still very important.

POOR PERSONAL HYGIENE.  Watch the sushi chefs.  How often do they wash their hands or sanitize the cloths they are using?  Are they wearing gloves when they make the sushi?  Boards and utensils should be cleaned and sanitized frequently, especially when preparing uncooked products such as raw sashimi and then cooked products like tempura shrimp.

READY TO EAT SUSHI. Check the “sell by” dates of sushi purchased at the grocery store. Make sure the sushi has been kept cold after it was made and select only packages on display that are deep in the cooler or display case.  Take-out sushi should be eaten on the day of purchase.  Keep sushi cold on the way home and refrigerate until use.  Prepared sushi or sushi on a buffet should be kept below 40 degrees.

HIGH SODIUM CONTENT. Sushi can contain ingredients that are very high in sodium such as fish eggs, artificial “krab” meat, and various Asian condiments that are very high in sodium. If you or your loved ones are concerned about blood pressure you have to bear this in mind and help fit these foods into your daily eating plan. California style sushi without sauce is always a go-to item or you can ask the chef to make a roll with cooked shrimp and leave off the sauces.