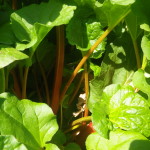 I feel like a hoarder.  I have rhubarb in my freezer.

I didn’t realize how special this was until I posted on my Facebook timeline that while visiting family in Ohio I picked rhubarb with my uncle.  Many people expressed an interest in finding some of their own, several wanted to know how they could grow rhubarb plants and still others posted that they had a couple plants and cherished every stalk each year. I also found out that there are two types of people in this world…those who love the mouth puckering tartness of rhubarb and those who don’t.

Rhubarb is considered a cool season perennial.  It needs colder winter temperatures and cooler summers, which is why it’s difficult to find in southern markets. I’m not sure I’ve ever seen it preserved and sold commercially, so if you want some for later in the year, you’re going to have to preserve it yourself.  My uncle was very generous with his rhubarb.  He tells me his plot is over 100 years old, the original plants started by his parents. 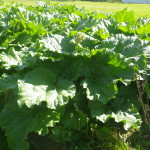 Although it is technically a vegetable, rhubarb is often mistaken for a fruit. One of the reasons is that rhubarb is frequently used in recipes that usually use fruit such as pies, jams and jellies, crisps, cobblers and sauces.

The celery-like red or green stalks are the edible portion. My uncle tells me that the deeper the red the more flavorful the stalks and the medium-sized stalks are more tender.  The leaves, while they look lush and green should not be eaten because they contain oxalic acid and are potentially dangerous.

Rhubarb is low in calories (1 cup = 26 calories). It is also a source of vitamin C (1 cup has about 10 mg or 10% of the daily needed amount).  The stalks can be tough and stringy making you think it has lots of fiber, but in reality only about 2 grams per cup. To offset the extreme tart flavor of rhubarb it is often combine with other spring produce such as sweet strawberries or  paired with ginger or cinnamon.  Rhubarb sauces go well with pork and poultry. 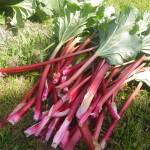 If you’re lucky enough to have a plant or two or find fresh rhubarb at a farmer’s market, it can be stored in the refrigerator for 2-4 weeks.  They are best if kept in the refrigerator crisper tightly wrapped in a plastic bag.  3 to 5 stalks = 1 pound =  3 cups raw or about ¾ cup cooked.

To preserve, rhubarb can be safely frozen or canned.  If freezing, blanching for 1 minute and quickly cooling helps retain flavor and color. Or it can be simply washed, sliced and dry-packed without added sugar.

I know I’m saving the rhubarb in my freezer to serve as a special treat to folks who really appreciate rhubarb…after all, not everyone’s uncle has an heirloom plot. 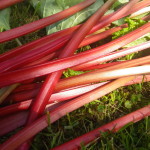