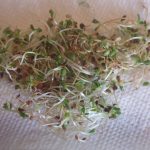 I like to ask sanitarians and other food safety experts what foods they WON’T eat. One item that’s always on their list is raw sprouts.

Over the past 20 years, sprouted seeds have been associated with at least 55 foodborne illness outbreaks with more than 15,000 people getting sick. All of this came from eating something people thought was good for them!

The damp, warm environments that are traditionally used for sprouting can harbor and incubate pathogens.   You won’t find sprouts on children’s menus, in school cafeterias or in nursing homes or hospitals.

The bottom line…..if you or a family member is someone “at risk” (children, the elderly, pregnant women or the immune suppressed) it’s best to avoid raw sprouts entirely. 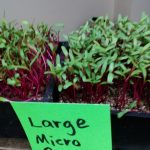 A similar food,  that’s becoming popular are microgreens. They are “cousins” to sprouts but less risky.  Sprouts are consumed entirely– leaves, stem, roots and possibly seeds, while only the stems and leaves of microgreens are eaten (similar to fresh herbs). One big difference is that you don’t consume the seed portion of a microgreen—seeds tend to be one of the sources of contamination in sprouts.  Another difference is that microgreens are grown in dirt not just water like sprouts.

What exactly is a microgreen?  They are edible baby plants, a little more than a sprout but younger than a “baby green”. They can be grown either indoors or outdoors in one to two weeks. People use them as they would sprouts, to add color, flavor, crunch and nutrition to sandwiches and salads or as garnishes. Microgreens can be grown from just about any seed; popular varieties are radishes, celery, dill, broccoli, green peas, arugula and mustard greens. The flavors tend to be similar but more subtle than the mature version of the same plant.

When growing or harvesting microgreens you need to take care watch for mold growth. Once harvested, they should be stored in the refrigerator and eaten as soon as possible. Microgreens can be purchased in some grocery stores or farmers markets. They tend be expensive because they are labor intensive and their shelf life is only two to five days.

What about nutrition?  Microgreens are full of antioxidants. Researchers reported in the Journal of Agriculture and Food Chemistry that the microgreens contain considerably higher concentrations of vitamins and carotenoids than their mature plant counterparts. The amounts were highly varied based upon species.

If sprouts are just little “too risky” for you, you might want to try microgreens.  Of course, like all agricultural products, they are not completely risk-free.  People that are immune-suppressed, pregnant women, children and the elderly should still consider the risks of eating these small greens.

Here are three great ways to use microgreens:

To keep the microgreens lasting longer, keep them between damp paper towels in a resealable container. You want a little bit of air circulation but you also want them to stay moist and not dry out. Handle them carefully with tweezers or a spoon so you do not smash them with your fingers. The best ones to buy are the ones that look the freshest. Our favorites are beets and radish microgreens. You can find them in farmer’s markets and grocery stores.