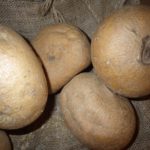 Jicama is a fun vegetable that’s worth getting to know. It looks like a big flattened potato with brown bark-like skin.  The “j” in jicama is pronounced like an “h”– (HEE-kah-ma). It is native to Mexico and is sometimes called a Mexican potato, Mexican turnip or a yam bean.

Technically jicama is a legume and its large tuber root is eaten raw or cooked. Peel off the brown skin and inside you’ll find crispy juicy white flesh. Some people describe the flavor as a cross between an apple, a pear, and a water chestnut. It has a texture similar to a radish.

Jicama is frequently used raw because of its crisp texture and crunch.  Quite often recipes call for it to be shaved thin, grated or cut into “matchsticks.”  Two great things about jicama:  the white flesh doesn’t discolor and turn brown like potatoes and it tends to stay crispy after mixed with dressings and/or cooked.  A one-pound jicama yields about three cups of chopped shredded flesh. 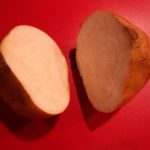 Jicama is available year-round in the produce section of most supermarkets. Select jicama that is firm, unblemished with a slightly silky sheen and free of cracks and bruises.  Pick smaller vegetables, they tend to be sweeter and crisper.  Sometimes stores display jicama in the area of the produce section that are misted. But, this is not a good idea, when exposed to water jicama tends to mold and become soft. These are ones to avoid.  Jicama should be stored in a cool dry place. Once cut jicama should be stored in the refrigerator 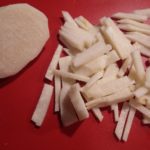 Jicama does not contain any sodium, fat or cholesterol.  It’s a good source of fiber and an excellent source of vitamin C. One cup of sliced raw jicama contains about 50 calories.

Try it on your next vegetable platter, in a stir-fry or as a crunchy addition to a salad.