Did you know that the idea of cleaning your plate first became popular during World War One? When foods like flour, sugar, and meat were growing scarce, Congress passed the Food and Fuel Act, which allowed the president to change how food was purchased, imported/exported, and distributed. It was coupled with a call to Americans, asking them to make the most of the foods that they did have, cutting back on food waste to ensure that their resources didn’t get squandered.

The request  to clean a plate and consume the foods that were available was presented as an act of patriotism that volunteers would undertake in order to make a difference in the war effort. It had a huge impact on the American public at the time. Schoolchildren even signed the following pledge…

“At table I’ll not leave a scrap of food upon my plate. And I’ll not eat between meals But for supper time I’ll wait” (Source). 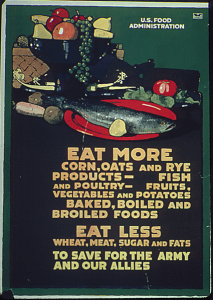 For many children of the era, adopting the “clean plate” approach to eating became a habit. Although the program ended after World War One, “Clean Plate Clubs” were revived after the Depression and again after World War Two. Both times, the goal was the same — don’t waste food and instead eat everything that is placed in front of you.

Today, the lessons of clean plate clubs are doing more harm than good. Portion sizes have increased dramatically, which makes eating everything on a plate an exercise in excess. Plus, forcing yourself to eat more food in order to “clean the plate” — even when you already feel full — can lead to problems with interpreting fullness cues down the road. And it’s a bad habit. With obesity numbers skyrocketing and its accompanying health issues increasing as well, cleaning your plate is no longer a patriotic act. In fact, it’s advice you should discard.