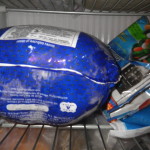 Dig around in your freezer.  Is there a turkey in there? Perhaps you got it as a gift last Christmas or at a great price after Thanksgiving last year. You just didn’t get around to cooking it throughout the year.  So you wonder. Is it safe to use for Thanksgiving dinner this year.

In general the answer is YES.

There are a couple of caveats.  Was the bird solidly frozen the whole time?   The temperature in the freezer needs to have been constant during the year and the wrappings should be intact. Did you have any major power outages during this past year where the turkey could have thawed partially or completely?  Since it takes several days for a turkey to thaw this is probably unlikely, but the safety key is that the bird was kept below 40 degrees the whole time the power was off.

A turkey kept for a year in a freezer will be safe. But (always a disclaimer) it might have some quality loss. This could be a texture change or an off-flavor. You might not want to risk it on the big day. So, it might be a good idea to buy a new turkey for the holiday and use the stored bird for a family meal earlier in the month.

Since obviously if there’s a year-old turkey in your freezer, you don’t cook a turkey very often, it’ll also be a good “run through” meal before the holiday.

Here are a couple of tips to get you started:

Getting that frozen turkey out of the freezer will free up some space for leftovers or perhaps another turkey that you’ll get on sale this year. Perhaps this year you’ll get around to cooking turkey more often. It’s not that hard.  I, personally, think that the turkey is the easiest part of the Thanksgiving dinner.