What don’t you eat? 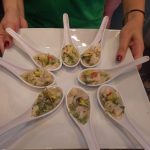 I frequently teach food safety classes for food service managers. At the end of the first day of class—after sessions on foodborne illness pathogens and potentially hazardous foods— someone usually asks me if there are foods or places that I just don’t eat.  Local sanitarians are often guest speakers in this class—I like to ask them that same question. I think it gives the class members “food for thought” and makes the information we’ve taught more personal.

You may have seen the list that’s been published by several sources and frequently pops up on Facebook. It’s the six foods Bill Marler never eats (http://www.marlerblog.com/lawyer-oped/6-foods-bill-marler-never-eats/).  Marler is an attorney that frequently litigates foodborne illness cases. His six “NO GO” foods are:  unpasteurized milk, raw sprouts, undercooked meat, pre-washed or pre-cut fruits and vegetables, raw or undercooked eggs and raw oysters or shellfish.

My list is similar. Like him, I don’t do undercooked meats, unpasteurized milk, raw sprouts or raw oysters.  I also add to this list:  some raw fish, ceviche, unpasteurized cheeses, Hollandaise sauce, home canned foods and some foods at buffet lines.

I’m not as picky as Marler about the pre-washed fruits and vegetables.  While most of the time I do purchase unwashed and uncut items, I will occasionally buy pre-washed items to save time.  When I do, I watch the dates carefully and the refrigeration temps.

Also, I will occasionally eat an undercooked egg—but definitely opt for pasteurized eggs for recipes that require raw eggs, especially when serving to guests that may be immune compromised.

Why do I say “some raw fish”? Most fish that is used for sushi is frozen before use to kill potential parasites—so I don’t necessarily consider them risky.  There are other fish—like most of the tunas—that aren’t at risk for parasites and I have eaten them raw. But some “creative chefs” serve fish species that aren’t on the no parasite list. If I don’t know, I don’t eat. In general I usually opt for cooked or vegetable sushi. I consider the sushi chef more of a risk for cross-contamination than the fish itself. I watch to see how they handle the raw vs. cooked products, do they keep their ingredients cold and how often do they clean their tables.

I also won’t eat ceviche.  For some of the same reasons I don’t do “some raw fish”.  While many people consider the fish in ceviche “cooked” by the lime or lemon juice added to the raw fish—it isn’t heat treated.  The acids may reduce some of the bacteria—I just don’t know how much.  Some versions of ceviche are cooked, if I don’t know, I don’t eat. I frequently come across ceviche when traveling to locations that don’t have adequate refrigeration or where I have cross contamination concerns. It’s just something I avoid.

I also don’t eat home canned foods unless I know who made them and what recipe and process was used. If it’s an old recipe or not from USDA or National Center for Home Food Preservation I’m going not going to eat it. I also need to trust the person who did the canning….are they a rule and recipe follower? …if not…I’m not going to eat it.

I also questioned our own Chef Judy—what does she “not eat”.

While her is very similar to the others with oysters, undercooked ground meat, sprouts and raw dairy she interestingly adds chicken salad.

Having trained as a chef, she also adds a couple situations and locations that cause her concern. These include buffets, slow restaurants and places where prepared foods sit at room temperature.  All good thoughts.

When I ask this question of sanitarians their list always includes raw sprouts.  But also say that there are things they would eat themselves that they don’t feed their kids. These include undercooked eggs and undercooked meats.

Everyone’s list is a little different—based on their knowledge, experiences and education related to food safety.  No food can be completely risk free, but we can teach good food safety practices to help reduce these risks.  Everyone has to use their best judgement and make an educated decision for themselves (and their families) regarding what’s on their “don’t eat” list. What’s on yours? Send us a tweet @foodhealth or reply to the email that announced this post or click contact us below and let us know!