Perspective on Portions and Budgets 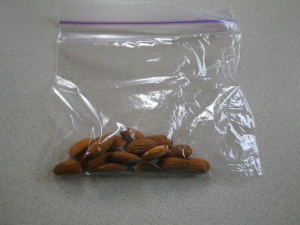 I grew up with a grandmother who knew how to pinch pennies. She bought dented cans, washed aluminum foil and cut the ends off toothpaste tubes to get the last little bit. So as my husband says, “I come by it naturally”. I’m always looking for ways to save money.

But sometimes I forget that there are different ways to look at things. We as teachers need to remember to look at our students’ perspective, especially when talking about food.

I was reminded of this by a good friend. We were recently at her house and she had small 100-calorie packs of nuts. I was surprised at the idea that she would buy these items. Not that nuts wouldn’t be a good snack, but the thought of the cost and the excess packaging made me question her decision making.

She probably saw the puzzled look on my face and quickly explained why she bought them. She said she knew they were expensive but she liked their convenience for a quick pick-me-up snack when she works late. The other thing that she likes about these prepackaged snacks is that she doesn’t have to spend extra time in the kitchen. She admits she doesn’t like to cook and says any extra time spent in the kitchen encourages her to overeat. She also commented that she’s been on weight control programs in the past that had her measuring and packaging food. She hated this, saying that being around food this much caused her to think about food and want to eat more. She says she does better if she’s just not in the kitchen.

For some this really does make sense.

Another perspective. Maybe you don’t want to have those big bags of chips hanging around. Small bags of snacks force portion control and don’t tempt over eating. I don’t know if I could re-package some foods without eating about 300 calories in the process. If you just want chips as a snack now and again, small bags are more practical and you save money by not throwing away stale chips that don’t get eaten. This is especially critical with children and teens who tend to want to open a new bag before finishing the old bag!

When teaching wellness courses I’ve been guilty of encouraging students to make their own 100-calorie packs. Part the reasoning here is to have healthy ready-to go snacks available, but also (at least in my mind) to save a little money over purchased packaged snacks or vending machine snacks. But, the next time I teach the class, I may add a little more discussion and a different perspective on this do-it-yourself concept. The process of making these bags drives home the reality of the portion size with these foods.

Speaking of money. I did some quick calculations on the nuts. You get seven .63 ounces packets of dry roasted nuts for $2.68. That makes each of the little packets about .40 cents each. Calculated out, the price comes to about $9.50 a pound. Not as bad as I though it would be compared to $9 a pound for bulk almonds. But there’s more to this picture than just little packets of nuts.