Make Your Salad a Rainbow!

Did you know that four final rules for implementing the Healthy, Hunger-Free Kids Act (HHFKA) were just announced?

In a nutshell, the USDA finalized its rules for nutrition standards for all foods sold in schools, including breakfast, lunch, and snacks.

According to a press release sent out by the USDA, “As a key component of First Lady Michelle Obama’s Let’s Move! initiative to raise a healthier generation, the rules will ensure that children have access to healthy snacks and that nutrition standards for the foods marketed and served in schools are consistent. The rules will also promote integrity across the school meals programs.”

Want to help communicate the key nutrition lessons that are central to these new rules?

After all, making healthful food available is only half the battle. We need to make it appealing to kids too.

This new salad bar sign is a better design and at a lower price than the previous version, and the video above offers some great inspiration on how to use it.

And that’s just the beginning. Here are some other “eat from the rainbow” resources that can help make healthful foods appealing to kids of all ages… 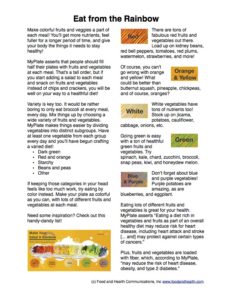