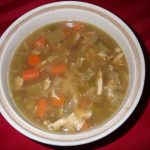 If you haven’t made Wonder Soup you’ve missed a treat.

My sister calls rotisserie chicken Wonder Chicken.  I think because these readily available, already-cooked, chickens make a quick and easy dinner.  Thus, a wonder!  I was at her home once and couldn’t believe how after dinner she just pitched the leftover bones along with the packaging.  She missed the chance to get another meal out of her Wonder Chicken… Wonder Soup.

I guess you have to be a little obsessed with saving money and eliminating food waste to want to make Wonder Soup.  Also, you need to take a little time to cook, which you may not have if you’ve just grabbed a Wonder Chicken for dinner.  But I think one of the best parts of a rotisserie chicken is the Wonder Soup. 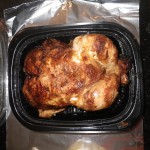 Several years ago I wrote a series of articles for this blog on rotisserie chicken:

Obviously the soup made from the rotisserie chicken will have more added sodium than one started from scratch, so use salt sparingly or do not add any more in the cooking process. It’s hard to measure the amount of sodium in the finished soup product, and you have less control when making soup from a rotisserie chicken than if you purchased an unseasoned chicken   I have found that the seasonings are usually sufficient in a small pot of Wonder Soup..

To make the soup you will use a two step process. First you make the broth and then you turn the broth into a soup by adding scraps of cooked chickens and vegetables.

Here is how I made Wonder Soup: I used the skin and bones from the chicken as well as the drippings in the take-out container.  I covered the bones with water (about 4 cups) and cooked on the stovetop.  Don’t add too much water, you really don’t have lots of meat to work with.   I simmered the bones for about an hour, drained and picked any remaining meat from them. If time allows I chill the broth to remove any excess fat that may rise to the surface, but usually it’s not much.  I added leftover meat and some mixed vegetables and simmered until tender.