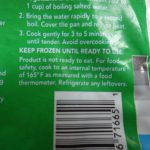 Except perhaps a quick glance at the recommended microwave cooking times, I’m betting that most people don’t look at the fine print on a bag of frozen vegetables. I’ve recently noticed that some packages now contain the food safety caution:

“Product is not ready to eat. For food safety, cook to an internal temperature of 165 degrees F as measured with a food thermometer. Refrigerate any leftovers.”

As a food safety instructor I’m really pleased to see these kinds of cautions on packages—now to get people to read and believe.

Most people think of frozen vegetables as relatively safe but, they are not intended to be consumed without cooking, because they may contain bacteria that are only killed when cooked properly and thoroughly. These bacterial pathogens are the biggest concern.  Several foodborne illnesses have been linked to frozen vegetables including  Listeria monocytogenes, Norovirus and Hepatitis A.

According to the Frozen Food Foundation  http://www.frozenfoodfacts.org/about-frozen-foods/helpful-hints   freezing does not kill all bacteria; some can live at freezing temperatures. Even frozen foods that were partially cooked by the producer may not have been cooked at temperatures high enough or long enough to kill all the bacteria that might have been present. They emphasize that it is important to prepare ready-to-cook frozen foods according to their cooking instructions.

The U.S. Food and Drug Administration (FDA) considers most frozen vegetables “ready-to-cook” NOT “ready-to-eat.”  As their name suggests, ready-to-cook foods must be cooked according to package instructions before eaten.  On the other hand,  ready-to-eat (RTE) foods are just that: foods that can be eaten right out of the refrigerator.

You might be asking yourself, why would someone eat frozen vegetables uncooked?  One thought that comes quickly to mind is when people pop veggies directly from their freezer into the blender for a smoothie. I also know several salad and salsa recipes that use frozen or partially thawed but not cooked vegetables as ingredients.

Remember that young children, the elderly and people that are immune compromised due to illness, transplants or HIV are more susceptible to a foodborne illness than others.  Pregnant women should be very cautious because a Listeria infection could lead to miscarriage, stillbirth or septicemia or meningitis in the newborn.