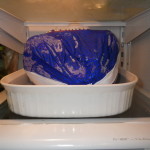 I’m giving my age away a little, but I remember an old Johnny Carson monologue (Hint for people under 40:  he’s the guy on the Tonight Show before Jay Leno).  It was the Tuesday before Thanksgiving and Johnny asked the audience if they had placed their frozen turkey in the refrigerated to thaw. He then concluded that if they hadn’t they might as well cancel Thanksgiving.

It really isn’t that drastic an issue; there are other options for thawing that bird.  It is amazing to me the problems people seem to have with a frozen turkey and the many creative ideas I’ve heard over the years for getting it thawed in time.

Let me set the record straight. It is not safe to thaw a turkey in the trunk of your car, in the garage, basement or clothes drier. Even though the turkey may stay frozen on the inside as it thaws the outside is exposed to the temperature danger zone and this might result in a food borne illness.

You can also defrost in cold water, but this takes a lot of time, attention and water. This method can also be used to finish thawing the turkey that was only in the refrigerator for a day or so.  Place the turkey in a leak-proof bag in a clean sink and submerge in cold water.  This water needs to be changed every half hour.  The reason for this is the water needs to be kept under 70 degrees the whole time to keep the outside of the bird cold.  It takes about 30 minutes for each pound, so your 25 pound turkey would have you changing water for 12 ½ hours.

If you have a smaller turkey, it could be thawed in the microwave, but it needs to be cooked immediately after thawing.

You could cook the turkey directly from the freezer.  It will take about 50% more time.  So your 25 pound bird would take you about 7-7.5 hours to roast, and it won’t be stuffed.  If you do this method, you could carefully take the frozen pack of giblets out during the roasting when the bird becomes thawed enough. Then throw them away. You’ll need to use a thermometer to assure the turkey has reached at least 165 degrees before serving. Do not try to deep-fry a frozen turkey.

If you really are having trouble finding space to allow a frozen turkey to defrost in the refrigerator for several days, you may consider purchasing a fresh turkey and picking it up just before the holiday.  But you’re still going to need to find room for it in the refrigerator unless you start to roast as soon as you get it home from the store.

Johnny was right-on-the-money with many of his smart quips…but a frozen turkey on Thanksgiving morning is not a reason to cancel the whole dinner. It just might be a little late.