Is that a girl pepper? 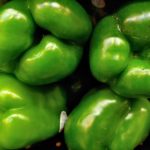 As educators, it seems like one of our major jobs these days is helping people sort out the truth from the myth and misinformation on the web. Sometimes these articles and memes sound like they might be true and then then next thing you know everyone’s talking about it and then everyone believes it.

Perhaps you’ve seen the one about buying green peppers by their sex. The post reports that peppers with three lobes or bumps on the bottom are male and better for cooking. Female peppers supposedly have four bumps and are full of seeds, sweeter and better for eating raw.

Let’s set the record straight, peppers don’t have genders. When you look into the botany of peppers there is a little truth to the sex thing. Peppers grow from flowers that do have both male and female parts. But the peppers themselves do not.

So, what about the number of lobes on the bottom of the pepper? Like many other things (including people) the shape is determined by weather, growing conditions, and genetics. The number of the bumps don’t give us any clue to the flavor or sweetness of the pepper.

Just like many other fruits and vegetables, the degree of sweetness is generally a factor of the ripeness of the item. So, if you want sweeter peppers, select those that are red, yellow or orange. Yellow and orange peppers are a separate variety. Green peppers will gradually turn red on the plant but not yellow or orange.

When selecting pepper, for the best value, get one that is heavy for its size. As bell peppers ripen, they begin to wrinkle and lose the firmness in their skin. Therefore, avoid dull, shriveled or pitted peppers. Refrigerate peppers in a plastic bag and for best quality use within five days.

Bell peppers are a great source of vitamins A and C and beta-carotene. If your budget will allow, pick the colorful red, orange or yellow peppers. They have more vitamins and beta carotene than their green counterparts. Peppers are fat-free, saturated fat-free, low in sodium, cholesterol-free and low calorie. 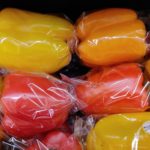 Just another case of you can’t believe everything you read on the internet.